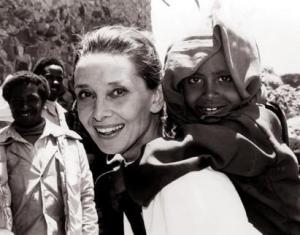 An introduction for Celestial Beings is in order, as Audrey Hepburn is the first so chosen by us, which we do with deep humility, affection and gratitude. For all we know, Audrey Hepburn may be the only one we so designate. She will obviously be a hard act to follow. If she were alive today we are quite certain that she could care less what we would write about her. But we’re just as certain she would never let on as such. Individuals with that rare quality called class just don’t go there. She lived her life with integrity, dignity and compassion. Her strength and perseverance caring for literally the neediest and most vulnerable among us almost made you forget what an exquisitely beautiful and feminine woman she was with a wit, intelligence and endless charm to match. It sounds like we were in love with her. We were. The world was.

From the earlier days of her film career.

To the culmination of her first major role.

Her delicate beauty and kind manner should not ever have been mistaken for weakness. She had self-awareness, tenacity and a resilience not often seen in young stars, or in most anyone else for that matter.

She had great charm and used it wisely, gently and with understated strength to disarm, as Mr. Donahue discovered.

From one talk show host to the next. This time she speaks with Barbara Walters.

The magic she had on-screen, a prelude to the role she lived with infinite compassion.

Her life memorialized in exactly the way one would have imagined.

One Response to “Audrey Hepburn”