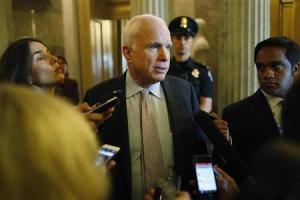 I guess we can’t get lower in the polls. We’re down to blood relatives and paid staffers now.

Geez, the debt limit clocks are furiously clicking down on all the cable news shows. Some Republicans are still calling their constitutional duty to pay the bills they authorized a compromise. Wow. And, being fair and balanced, we try to find a parallel fault within the Democrats. But there really isn’t one this time. Ironically, this is where the remainder of Senator McCain’s words should be heeded. “We’ve got to turn this around. And the Democrats had better help us.”

Beyond this man-made crisis of the day, the bigger issue is the future of the Republican party and overall governance in this country. Each party has always had its extreme elements. This is not necessarily a negative term. So-called extremists can push a complacent center in the direction it needs to go, though not in some absolutist fashion. Usually the parties pay lip service to these hard core constituents, such as letting them have a plank or two in the utterly meaningless convention platform. But if consistent and valid enough, the message of the extremists can begin to make its mark in policy. This is not only a good thing, it is the essence of how this country has improved and moved forward. Think civil rights, social programs, life-saving drugs, the best universities and a tech community the envy of the world.

What’s different this time is that an extreme element has been allowed to hijack the system. The Republican party is so fractured it has had no courageous adults able to appropriately marginalize the extreme. Falling on a sword is not a winning strategy. I think it would be emotionally satisfying for many Republicans to let loose on the Tea Party. Some who don’t, no doubt, fear for their jobs. But there are others who realize this could make some workable compromise even more difficult to attain. And so, somehow, Democrat leadership has to provide a way for the Republicans to escape with some shred of dignity the mess they created. Likewise, Republican leadership has to accept a long-term structual change that will avoid a similar situation in the future. To begin with, simply get rid of the need for Congress to approve again paying bills they’ve already authorized. In the larger picture, the Republicans also have to decide whether or not they want to be a party of ideas, positively embracing the future and all its promise. After all, it’s not like the current line-up of Democrats is some revered group. But if the Republicans continue to use most of its energy and resources to demonize, to pout, to turn inward in a “me against the world” paranoia, they might just lose the blood relatives and paid staffers, too. That won’t be good for anyone.