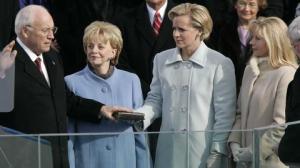 The latest in the Cheney legacy is the sad family dysfunction. Daughter Mary is the married lesbian daughter of Dick and Lynne and Liz is the daughter running for Senate in Wyoming. Recently, Liz has made it known she’s against gay marriage. This has caused the two sisters to cease talking with the other.

The mean-spirited liberals of the world are probably enjoying the Cheney pain. But even the most objective of observers have to wonder just what price Dick, Lynne and Liz are willing to pay for a Cheney to get into the Senate. Does Liz truly feel this way about gay marriage or might this be another politically expedient, politically self-obsessed decision? The fact that she is doubtlessly a carpetbagger — having lived in Virginia for years only to parachute back into Wyoming — makes her politically expedient. But if this is disqualifying, then Bobby Kennedy and Hillary should never have been senators. It’s opportunistic and maybe crass, but that’s pretty much the definition of a politician.

But the political expedience that genuinely troubles is that which demeans good people and that breaches the trust of freindships. It is Liz, Dick and Lynne deciding their collective ambition trumps respect for Senator Mike Enzi and former senator Alan Simpson. Mike Enzi is a card-carrying Republican conservative. It’s difficult to discover exactly what major disagreement Liz Cheney may have with him. Heck, they even agree on gay marriage.

With Alan Simpson, Lynne Cheney called the wrong guy a liar. Simpson may be a lot of things, but liar is not one of them. Simpson was trying to explain his support for Enzi when Lynne Chney told him to shut up, then to shut up again and then once more good measure. Later she would deny she ever said as much and then went on to call Simpson a liar.

What to make of this? The Cheneys, all of them, are exceedingly intelligent and talented. But they have lived in their bubble so long without enough self-reflection that they lack perspective. They lack the perspective that truth matters, that true friendships aren’t transient and that power, though addictive, shouldn’t be sought at all costs. Somewhere along the line they lost their way and they don’t even know it. Liz, Lynne and Dick Cheney might want to heed the advice he gave in his 2000 convention:

Last hour is coming. The last day is near. The wheel has turned. And it is time. It is time for them to go.