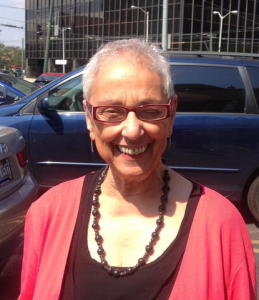 She was christened Carole Ganim, then she became Sister Caritas, then Sister Carole and she is now, again, Carole Ganim. She is a woman who was impassioned with what she felt was the spirit of God and wanted to actualize her love in service of others as a nun in the Catholic Church. It was a different time, the ’50s. She left the sisterhood in the ’70s, finally being overwhelmed, or maybe just fully exasperated, with the male dominance in the Church and all its ramifications.

Ramifications? An environment of condescension toward women. This, in part, has prevented women from becoming priests even though there is simply no theological basis for doing so. It has also prevented women from holding key positions within the Church. Let’s see how well excluding women has played out. Do you think there would have been the systemic sexual abuse of children and cover-up? Do you think the corruption that Pope Francis is now confronting would have been as deep and as widespread? Do you think there would have been an obsession with birth control and divorce, an obsession that has severely reduced the spiritual energy of the Church to deliver the message of Jesus?

Only now is the Church, in the person of Pope Francis, beginning to substantively address its lost ways that Carole Ganim and others knew and felt decades ago. It’s too bad for the Church Pope Francis came around so late….or maybe, Carole Ganim so early. Then again, what’s in a woman’s heart and soul transcends a title. Carole Ganim will always be a sister in the deepest sense of the term.