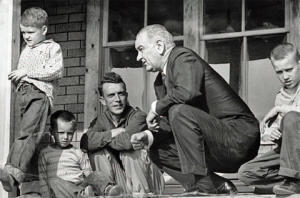 Lyndon Baines Johnson was one of the most vilified presidents. Unable to do what no other president had had to do before — exit a war without victory — LBJ kept the troops in Vietnam in what most began to believe was a hopeless task. As more Americans were killed in battle, the more venom was directed at Johnson. And there was another war. Now, fifty years after his declaration of war on poverty followed by sweeping legislation we take for granted today, his legacy has attracted some unusual proponents: highly respected and accomplished conservatives.