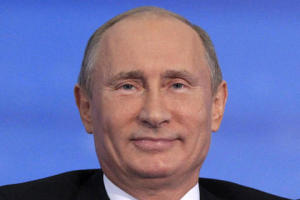 Sometimes we likely grow complacent with tyrants. No chance of that today after reading George Will’s column on Ukraine. Its president, Viktor Yanukovych, had earlier opted to reject a trade and economic agreement with the European Union in favor of seeking financial aid from Russia and Vladimir Putin. To say the least, this has not gone down well with a wide swath of Ukrainians as riots continue in protest. The death toll mounts.

Will takes the gloves off with Putin. Never referring to him as president or by his first name, the Post columnist states the obvious but too few times heard truth that Putin governs by censorship, corruption, brutality, oppression and assassination. But one gets the feeling Putin may actually revel in this characterization. That said, being one vain dude, Will calling him “ferret face” likely hurts. A lot.