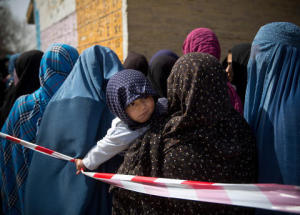 There is always a huge price to pay in war, the ultimate price. People die. Many times innocent people. And so it was with Anja Niedringhaus, a Pulitzer Prize-winning photographer for The Associated Press. If there can be any solace, it is that her work as a journalist helped illuminate and make real the story of Afghanistan. And, possibly, this journalism played a role in making elections in Afghanistan reality. She was forty-eight.