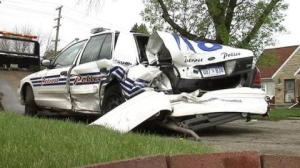 Yesterday I was driving down a fairly busy street when I saw a man off to the side of the road who lay motionless under his bicycle. As I pulled over and called 911, a postal worker stopped her truck and did the same while someone who just happened to be walking by went to check on the man. Within minutes, there were five people at the scene — three had called 911 and one was still on the line with 911. We were all a bit anxious because the man wasn’t moving and there was blood from the back of his head. Another individual called 911 again as we all wondered where the police were. The man then moved just a bit, which was both good and bad. The good was that it showed he was alive and the bad was that it seemed to increase the flow of blood. Again, we wondered where the police were.

Finally, they arrived. First, one car, then two, then three. A total of six officers, three donning surgical gloves, went to help the injured man. Those of us who first saw the man stayed on for a bit. But with the police doing their work and the man now talking, there was nothing for us to do and we went our separate ways. When I got back into my car, I wondered just how long it had taken the police to respond. I checked the time and duration of my call to 911. Began at 6:01 p.m. and lasted two minutes, so the call ended at 6:03. I then looked at the time on my phone — 6:10. In that the police had arrived at the scene at least three minutes before I got back to my car, this means the police arrived at the scene no later than 6:07 and might have actually gotten there a minute or two before that. Basically, an exceptional response that didn’t seem as such at the time when, with our adrenaline and anxiety in strong supply, we seemed to wait forever for the police to arrive.

This relatively minor incident emphatically shines a beacon on just how much we expect, and usually receive, from emergency responders. When someone is in distress, we want the Cavalry and we want them now. And then there is Detroit and its citizens. Their option? Being Detroit Strong.