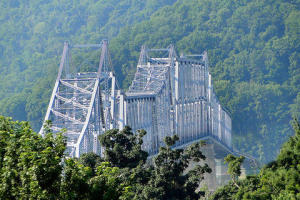 The Milton-Madison Bridge over the Ohio River

On a trek that would take me from Chicago to Miami, I decided to depart the Interstate (I-74 south of Indianapolis) and take U.S. Route 421 south (actual direction: south/southeast) over the Ohio River into the Kentucky capital of Frankfort, where I would again hook up with the Interstate. (I-64 into Lexington and then I-75 all the way to Florida.) I did absolutely no research on what may lay along this route. I simply looked at a map and saw that this seemed to be a fairly direct way to get me further along on the path home to Florida. I was wrong.

What appears to be a fairly straight line on a map does not translate as such in reality. In just about every small town along the way — actually, there are nothing but small towns along the way — Route 421 would take you right and left and right again through two or three streets of the downtown area, as if the various Chambers of Commerce had worked with the highway department to make sure no business, park or church was overlooked. Other than Dollar General, which had a half-dozen stores along the 139 miles from Greensburg, Indiana to Frankfort, Wall Street had long since forgotten rural America. But nature hadn’t. Trees bursting with summer life from a brutal winter, the greenest of grass and the art of the rock formations along that part of the route carved through the hills in what seemed like one long zigzagging curve.

Old wood churches, usually Baptist, would occasionally pop up along the countryside. They were set well off the highway with long narrow drives connecting the two. Being a Sunday morning, the parking lots were filled. There were the Amish and their farms. There were old men gathered on a few benches downtown talking and keeping vigil of what passed by, including yours truly. It was at this point I felt a little conspicuous. Their conversation ceased as they eyed what was a car and person foreign to them. My initial reaction showed my bias. I slowed down even further thinking of the local police and speed traps with no recourse. I was an urban northerner, a jaded one at that, and they were rural southerners in their world. As absurd as I knew it was, I projected back to what it might have been like in the south for civil rights workers fifty years ago. Just how alone and vulnerable they must have felt? Or what must it feel like to be viewed suspiciously as a black man, as President Obama captured so well in his words after the Trayvon Martin shooting?

But then I thought of today and how people in rural America, as their numbers decrease and they simply don’t exist on Madison Avenue, might feel threatened. ( http://bigstory.ap.org/article/census-rural-us-loses-population-first-time ) I realize this is not a monolithic group. Still, the dramatic changes in this country in just the past decade have largely been driven by forces outside that of rural America. Those in this part of the country are a shrinking minority with little collective voice, which can’t be all that comforting. Meanwhile, many of us tend to think of politics in broad strokes…from the top down. But it seems to me that this approach creates an us versus them mentality. It produces a left that all but ostracizes the rural right. It just can’t feel good to have your president speak condescendingly of you as clinging to your guns and religion. Likewise, from the right, it creates a grass roots anti-goverment movement in the form of the Tea Party even though many of its members are supported by the very government they demonize.

If we thought in terms of the bottom-up (or maybe better put: inside-out), we would view each other as having the same basic needs and pursuits. Providing for family, human dignity, health, happiness. We could lose the fear of the unknown and embrace the beauty and expansiveness of diversity. Immigrants wouldn’t be shunned or persecuted. Students and faculty at universities boasting of academic freedom wouldn’t block Republican leaders from speaking. Inclusiveness works both ways or not at all.