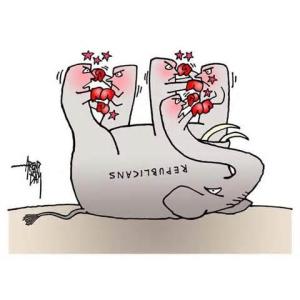 Miami Republican U.S. Representative Mario Diaz-Balart, not exactly a tree-hugging liberal, lashed out at his own party over its lack of initiatve with immigration reform.

The fact that he is a conservative Cuban American gives Diaz-Balart substantive standing on the issue. By being on the ground in one of the most diverse parts of the country, Diaz-Balart offers an authenticity on the issue that can seem lacking in the GOP. Likewise, without Cuban Americans as its foundation, the Republican Party would be dead in Florida, which would be a death knell for the national party as well. It’s one thing to have relatively weak Republican leadership to appease the far right by paying lip service to them. It is quite another when this lip service begins to alienate one of the more powerful and accomplished sectors of the party.

Meanwhile, there is a growing tension between a group of conservative Republicans and some members of the Tea Party. Ironically, some of the former have roots in the latter. But they have transitioned from a group of critics to a group of action in formulating potential solutions to problems such as poverty. Just how far off the radar has that been for the flame-throwers?