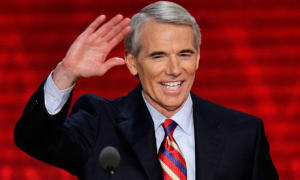 The most important state in the country when it comes to electing the next president, Ohio, had a huge week. First, Cleveland may be on its way to regaining the title of “best location in the nation”, as both political parties had it on the short list for their next convention. Earlier this week the GOP made their choice and Cleveland it was. But that was obviously just the beginning for the lakefront city. Lebron.

The Republican convention is important to the city. Lebron is potentially transformative. By going back to Cleveland, Lebron makes the country feel good because family and friendship and loyalty won out over all else. It also puts Cleveland center stage as the home Lebron’s coming back to. It’s a story of renaissance, of deep connection in a transient world and it sheds the light on the essence of a most American of cities in a most American of states. It seems entirely fitting that Ohio — a hybrid of urban and rural, white collar and blue collar, a place that was hit hard when the old economy died, a place where pragmatism has periodically won over idealogy, an unpretentious place where people struggle and endure and find bounties in unexpected places — should be the final arbiter in 2016.

And though off the radar now, as Rand Paul and Ted Cruz receive their headline-grabbing fifteeen minutes of fame, if and when the Republican Party decides it wants to win back the White House, it better be looking Ohio’s way in the form of Governor John Kasich and Senator Rob Portman.

Kasich has had his share of setbacks and critics when trying to adhere too closely to a conservative agenda. But he has also shown some flexibility, as evidenced by his support of Obamacare Medicaid funding on moral grounds. Ironically, it’s the former — the setbacks and the critics — which may be most helpful in a Kasich Presidential run. In a sense, Ohio is a petri dish for the country, having to balance a mix of competing and largely equal forces. Pretty much what life and politics have always been. No perfection. Messy. But with tenacity and good intentions, sometimes something gets done together for the better. Purists need not apply. It also seems refreshing that Kasich’s first wife has campaigned for him post-divorce.

And then there is Senator Rob Portman. Conservative fiscally and extremely well respected on both sides of the aisle, he is likely best known to the general public for his support of gay marriage.

Kasich, by presiding over a government as a governor and possessing an energy for campaiging and the media, may be seen as better suited to run for President. Portman, on the other hand, might better be considered as a solid choice for Vice President, the steady guy in the background. There is no possibility of a Kasich-Portman ticket. But it would be wise for the Republicans to make sure one of them is running come 2016.