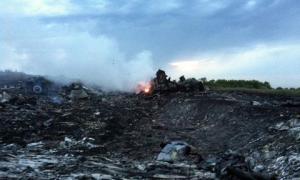 The rule with a tragedy such as has materialized today near the Russia-Ukraine border is that the first analysis of what happened is inevitably wrong. But with the downing of Malaysia Airlines Flight MH17 this first analysis just may be the exception to the rule.

The first analysis is that Russian separatists, either directly or indirectly assisted by Russia, used a Russian-made Buk missile launcher to fire a surface-to-air missile. This missile launcher can hit targets up to over 70,000 feet in altitude. The Malaysian flight was cruisng at 33,000 feet. It is further postulated that the separatists had no intention to shoot down a civilian airliner — that either they mistook the Boeing 777 for a Ukrainian jet or they were aiming for such and the Malaysian flight somehow was in the path. Either way, it is the ultimate in mistakes as 295 innocent people are now dead.

The first mistake, however, was made almost four months ago by aviation departments and airlines around the world. As Russia and Ukraine split from the other, miltary movements and tension grew in exactly the area where the the Malaysian airliner was shot down. This heightened military action included the shooting down of Ukrainian military aircraft. But airlines from around the world kept flying over the area…until today. Finally, airlines began to get in line to announce these flights would cease.

There is another potential mistake in the making: a flawed investigation. To its credit, early on CNN was emphasizing how cruicial it was to secure the primary accident site, the debris scattered over miles of countryside and the black box. This is easier said than done in that it is effectively a war zone. A legitimate third party is needed.