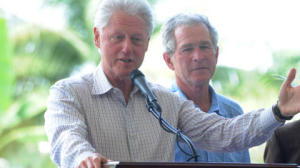 In her homage to Bill Clinton in Sunday’s New York Times, because it seems popularity polls are very important to her, Maureen Dowd just couldn’t help herself and took her usual swipes at W.

It was her standard laundry list of Iraq and Katrina. In this case, she had her usual certitude (how very comforting that must be to know so very much) that surely Bill wouldn’t have got into these messes. I don’t know. It seems to me it’s a pretty complicated world and sometimes there simply are no good answers.

Katrina. No doubt the ball was fumbled at the early stages. But there was little to work with there. New Orleans Mayor Ray Nagin? Felon Ray Nagin. About as bad as a politician can get and that’s saying something. But after the slow start with Katrina, an unprecedented amount of money and resources poured in.

Iraq? Again, it’s a complicated world. But even if Iraq can definitively be declared a mistake, can Dowd ever show any perspective? Bill Clinton did much good in office but he did nothing when genocide was rampant in Rwanda. By his own admission, Clinton said if he had acted differently he could have saved hundreds of thousands of lives. Should Clinton be forever defined by his failure in Rwanda?

Does Dowd want to condemn W for Iraq and say nothing about Clinton and Rwanda? Apparently. Does she want to give any credit for W’s massive effort to combat AIDS in Africa, an effort considered to have saved potentially millions of lives? Apparently not. Is it because those millions of lives aren’t that important? Or is it that she loathes W so much she simply can’t bring herself to accept the good he did?

Dowd obviously gets to choose her favorites and the facts she wants to highlight. But why does this always have to be a zero-sum game with her? There seems to be mean-spiritedness in her words. It’s as if much of her working model as a columnist is so restrictive and repetitive by necessarily consisting of a self-righteous venom. I don’t know what enlightened reality she lives in. It strikes me as a world of elitism in which there is little self-reflection and where there is always an echo chamber to reinforce.