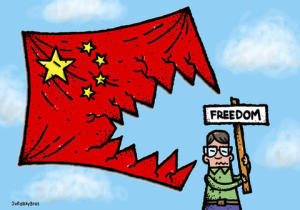 Steve Wynn has survived and thrived in the casino business. Most recently some of his greatest profits have come from Macau, which is an SAR (Special Administrative Region) of the People’s Republic of China. The other SAR, interestingly enough, is the protest-filled Hong Kong.

Wynn made remarks yesterday extolling the virtues of China while harshly criticizing the U.S. government for its regulation of business. He also went on to say that he is more scared about America than China. It is easy to see why Wynn would think the way he does.

Trying to open new casinos in the U.S. is a really messy process with numerous special interest groups and local politicians with their hands out and pockets open wanting to extract their piece of the pie. For some reason people freely choose to lose billions of dollars in a rigged enterprise called slot machines. Wynn has been one of the more proficient in capitalizing on this very basic ignorance and weakness in millions of individuals. And, yes, I know, Wynn and other casino bosses talk about the entertainment experience and that it’s so much more than gambling. Really? Take away Wynn’s slot machines and he’s out of business.

But in Macau, unlike the U.S., there’s relatively limited regulation. Mr. Wynn gets to like this. It means much more money for him. Because he’s an American, he also gets to freely make his absurd, myopic comments favorably comparing China to the United States. I guess Wynn gets to be amoral when it serves his business interests. He gets to forget about the gendercide in China which sprung from its one-child policy. According to former President Jimmy Carter, 50 million girls are missing in China due to being murdered at birth by their parents or by selective abortion of females, an ultimate war on women. There are no survivors.

Wynn gets to look the other way when a Chinese scholar, a moderate one at that, is sentenced just this past month to life in prison for daring to speak about freedom. And I guess Wynn gets to call the protesting in Hong Kong “a party”, even though this party has only materialized because China won’t live up to its commitment: to allow the citizens of Hong Kong to freely elect their leaders. Heck of a party, Steve.