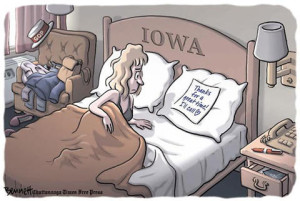 Jeb Bush seems to be intent on doing the unthinkable in Iowa…not to pander to the far right and farmers.

Jeb Bush has been pro-immigration and pro-Common Core for a long time and he’s decided to fully own these views. He has also come out against the type of federal hand-outs to the agriculture industry that many of those anti-entitlement Iowa Republicans conveniently forget are massive entitlements. Funny how that works.

It’s ironic that the most establishment of candidates could turn out to be the most revolutionary .Republican politics in Iowa has aways been about a small group of people having a disproportionate impact on the nominating process. This group is usually to the right of the mainstream GOP and far right of centrist independents. One can win meticulously gerrymandered districts with these views. But they get crushed in presidential races.

Enter Jeb. His power and donor base may just be strong enough to overcome his lack of support in Iowa. If so, it could render a death blow to the political significance and influence Iowa has managed to maintain for decades. If you’re a Republican wanting your party to take back the White House, this turn of events would be exceedingly good news.