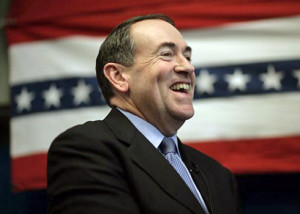 Conservative Washington Post columnist and Fox News contributor George Will successfully and devastatingly explained today what will only be an ongoing weight for those in the Republican Party serious about winning come election time 2016. Will succinctly captured the essence of former Arkansas Governor and announced presidential candidate Mike Huckabee. And it isn’t a pretty picture.

Huckabee is a somewhat dangerous type of candidate for the GOP. He just seems so nice and affable, downhome friendly. But, like just about everyone else running for president, he’s a crafty, calculating, talented politician. He will no doubt have his far right, fundamentalist following. But the danger for Republicans is to have him accepted by the party as a mainstream candidate. Listen to his words about religion and the rule of law. Scary stuff, unless you’re a Democrat.