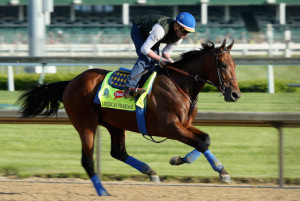 American Pharoah lost the first start of his career at Del Mar last August. No one has gotten by him since. He  has won six in a row, most notably the Kentucky Derby and the Preakness. Which means that yet again Thoroughbred racing has a chance to have a Triple Crown champion, something that hasn’t happened since Affirmed in 1978. From 1979 until this year, eleven horses have had a chance to win the Triple Crown. Some got close, very close. No one took it home.

This time may be different. American Pharoah has not truly been threatened in any of his wins. He has natural speed to get good position.  He also has a trainer, Bob Baffert, who has been on the top of the game for years. Baffert knows how to win these types of races. Likewise, jockey Victor Espinoza is a steady veteran who won’t be rattled by the huge crowd and fellow jockeys trying to deny him history. But this is not a walkover.

Some think American Pharoah may not like the mile and a half of the Belmont, as contrasted with the mile and a quarter of the Kentucky Derby. I tend to disagree with this assessment. The old saying, “pace makes the race”, strikes me as more fundamental. If American Pharoah is loping along on the front in soft fractions or rating just behind pacesetter, he’ll likely have enough kick in the final quarter mile to win. But races rarely play out as planned.

Materiality, one of the two Todd Pletcher horses in the race, looks to have the best chance to be the upsetter. He went into the Derby undefeated. But a terrible start pretty much made him a non-contender, though he managed a respectable 6th placing. But here’s the rub, Materiality and American Pharoah have the same running style. They both go to the lead or stalk just behind the lead. If these two hook up early, it could be a race for the ages. It could also be a meltdown for both of them with late-grinding horses kicking on by. If this is the case, most would think Frosted would benefit the most. He has closed in his last two races, including a 4th in the Kentucky Derby. But don’t be surprised if Pletcher’s other horse, Madefromlucky, is heard from.

Either way, whenever there’s a chance for a Triple Crown champion, many in racing say it will help the sport. Unless it’s a horse for the ages, like Secretariat, I don’t think so. Yes, if he runs a few more times, crowds will be bigger than usual when he does and there will be an increase in betting. But racing will still be far off the radar. In fact, from a marketing point of view, the best thing for racing is to not have a Triple Crown winner. In this way, the expectation builds for the next time. And the Triple Crown will remain the most elusive prize in all of sports.