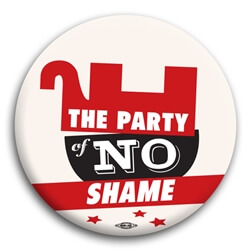 The infinitesimal peep heard from some Republicans objecting to the racist, anti-American principles of the bankruptcy expert reminds one of a tiny plastic squirt gun against a bazooka. So if anyone is waiting for what will finally push the GOP to rightly and patriotically expunge from the White House Ivana’s ex, well, that time ain’t coming. The most to be hoped for is that a strong majority of Americans truly do reject racism and bigotry and misogyny as core American principles and that by voting in a Democrat, though these voters are conservative, is their only making a clear statement to the former party of Lincoln that hate is not a governing tactic.

I have been a center-right independent for most of my adult life, so I gave up on the Republican Party the nanosecond the bankruptcy expert was nominated. It was impossible to avoid the moral bankruptcy (there’s that word again!) that has become part of the essence of the GOP DNA. It more than saddens me that a John McCain, Lindsay Graham or Jeff Flake never truly repudiated such hateful, despicable views of a soulless individual. But if there is any silver lining, it is that this country now can grow up and flourish or remain selfish children and self-immolate.

A true adult can’t let her or his hurt feelings get in the way of what is right. I get the distaste with amoral, calloused pols like Hillary Clinton. I get that parts of white America are being decimated. What was once the sole province of black America in the city slums, has now become the reality for many poor whites in states like West Virginia and Kentucky. We see it in poverty, decreasing life expectancy and in drug (opiod) addiction. But where it really resides is in the hopelessness of the heart. Hopelessness fuels choices to numb and, at times, to hate, to blame someone else.

As understandable as this may be for the lost souls is absolutely no excuse for others to use it as a smoke screen for their own selfishness and bigotry and avarice, which we all possess and most, we hope, try to overcome. But looking at the Republican Party, we see that, by and large, they have used others’ misery to advance their own narrow aims. In a country where it seems almost no politician can be…shame on them.