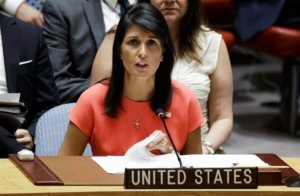 Though I’m nowhere near being in lockstep politically with United Nations Ambassador Nikki Haley, she nonetheless deserves respect, especially when it comes to the most basic respect for her as a human being. But instead of respect, some liberals have, in a word, assassinated her character by playing to the completely unsubstantiated rumors spewing forth from the Michael Wolff book, “Fire and Fury.” This speaks to the hypocrisy of some of those on the left.

The hypocrisy of what seems like the majority on the right is evidenced by the unlimited passes they have given the bankruptcy expert on all his lies, all his attacks on American ideals and his deeply sick treatment of women. Imagine what a Sean Hannity would have done with a Barack Obama cavorting with a porn star shortly after his wife gave birth. But it is ethically wrong and politically ignorant for liberals to use this as cover to personally smear an individual whose only fault is being a conservative. This type of moral relativism repels independent voters, exactly the type of voters Democrats need to win back the House and Senate this November. But the problem with this relativism strikes deeper than any one election.

When people play fast and loose with the truth, with the facts, it undermines society. Without the vast, vast majority of people agreeing to have trust in each other and in institutions, totalitarianism begins to creep in. Power and might begin to overwhelm the equilibrium of truth. Every person for herself or himself.

This bond of truth among us needs constant nurturing, the opposite of the full frontal assault day in and day out from the White House. But that lesson seems to be lost on a large number of tone-deaf liberals. The sad truth is that even if their candidates win this way, chances are the country still loses.