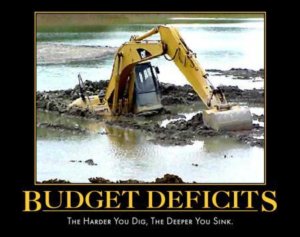 Paul Krugman is a liberal economist who has always excoriated Republicans. He’s part of the echo chamber on the left. For quite some time now, like years and years, his thinking is that Republican politicians exist to line the pockets of their backers, in the process, keeping themselves in office with their own pockets fully lined. Krugman feels all the GOP talk about family values and reining in the budget deficit is just that…talk, based on no real conviction, to placate their donor base. Implicit in Krugman’s thinking was that Democrats somehow escaped their own self-serving ways, which is why his bias is inescapable and his impact limited to those who are like thinkers. With all of that said, however, it certainly seems now he has a point.

The family values schtick of the Republicans is a completely false narrative. I mean, where to begin?! They have stood by as the bankruptcy expert has denigrated women and callously used families as bargaining chips. Even in politics some things should be off the table; they’re that despicable. But the Republicans, by and large, have remained silent as the petulant child tries to destroy anyone in his path.

But, surely you say, at least the Republicans hate the deficit and are fiscally conservative. But we now know that is also completely false. During a time of high employment and sound economy, they give away billions of dollars to the richest of the rich and to highly profitable corporations, some of which were hiding their money in foreign shell companies. (Patriotic, don’t you think?) In this process, the GOP exploded the deficit. But they weren’t done yet. Just this morning, they’re trying to orchestrate another blow-up of the deficit. If their spending package gets passed, it will balloon the deficit by additional hundreds of billions of dollars. But the markets are happy.

And so it is, Krugman spot on in his question and answer: Republicans in modern times stand for, well, what? No family values, not fiscal responsibility. Not much of anything, really. Just a lot of bull, like the one on Wall Street.