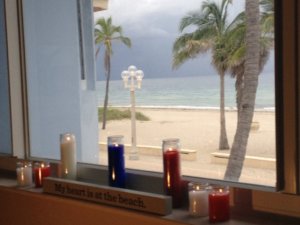 After a fitful night of sleep, one of those when one feels more drained after than before, he made his way around the tiny little haven on the ocean. After twenty years, many of which were challenging in the deepest, existential sense of the term, this was the last day. The new owners would soon be by to pick up the keys and make that final inspection. They didn’t need to.

In the course of living there, the ocean and the 500 square just steps away that held gently all his worldly possessions and sometimes struggling soul, had become as one and sacred in an increasingly profane world. So this morning, this last morning, he couldn’t stop cleaning, couldn’t stop rearranging the towels just so. It really wasn’t for the new owners; it was for this sacred place. It deserved no less. Every once in awhile he would pause and think how absurd it was to be fussing about these little details. By tomorrow, none of it would matter. But today, this one last day, it did. To him. To her.

He had become used to a solitary life. So much better than being with the wrong person. Simply no energy in the tank for that. Besides, he always had the ocean. Then she appeared. She would skip down the beach, like a school girl, unabashed joy with the water. And with, my God, me.

Somehow we had gotten to the sixth decade of our lives, with those layers of being bruised and calloused, still with the core in which the water provides peace, calm, and now  joy. Every minute with her at the ocean flew by in a nanosecond and yet continued to create a mosaic that would last a lifetime.

It is now time to leave the ocean. For a time. But the wonderful thing about the ocean is that it is so expansive, so embracing. It can’t be limited to any one place or time. I know that. Because it has provided me with the love of my life. And a real home.

2 Responses to “Until we meet again…”