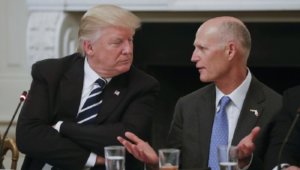 Anyone who has ever read any of my words about Marco Rubio, Florida’s junior senator, knows I am less than an enthusiastic fan. He was deeply in debt when billionaire Norman Braman took him under his wing and on his payroll. Without Braman, there is no Senator Rubio, a legislator that has shown a consistent lack of backbone and conviction. All of that said, he stepped up yesterday and took it head-on at a town hall-style meeting in Florida on gun violence that was broadcast on CNN. The emotions could have not been more raw. Rubio knew this and also knew his pro-NRA words were going to be severely criticized and jeered. So as much as I might disagree with Rubio, I respect that he didn’t hide, that he owned his policies. The absolute opposite can be said about the bankruptcy expert and Florida Governor Rick Scott, possibly one of the most corrupt businessmen-turned governor, who never went to prison. Both of these guys talk so tough, but basically were scared to face the carnage that their policies have, at best, done nothing to prevent and, at worst, have nurtured an environment where such carnage is executed with such ease.

I don’t know if the latest school shooting is finally going to provide the critical mass that will make a difference in this country’s absurd gun laws. Likewise, with such an emotional issue, it allows the calloused guns’ absolutists to pit various sides of pro-gun control forces against each other. These absolutists simply want to sow chaos so that nothing meaningful can be done. But no matter what happens in the weeks and months ahead, Americans should take a close look at politicians to see which ones are acting on principle and which ones are cynically playing the electorate against each other.

By now everyone knows what the bankruptcy expert is about. But Rick Scott has escaped the scrutiny he deserves, in part, because Florida is a state that backed the bankruptcy expert, just like Scott. (So much for sunshine, but I digress.) It is very likely that the disgraced healthcare CEO who made hundreds of millions heading a company convicted of multiple felonies and then stole healthcare from the poorest of the poor when elected governor, will be running against incumbent Bill Nelson for Senate. All Americans should know how, as governor, he ran away from the fire he helped ignite. Scary and gutless.