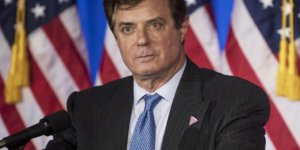 If you believe in journalism as it is practiced by The Atlantic, you believe these two things gleaned from its story on Paul Manafort: First, he  has a default reaction of suicidal thoughts when confronted by adversity and, second, he is exceedingly guilty of sordid actions which would bring such adversity. And now Robert Mueller, special counsel extraordinaire, is tightening the noose around Manafort’s neck. Manafort is toast. As immune as we’ve become to the many shames of the bankruptcy expert and his Republican enablers, the law; yes, the law will win out. And the law is having a field day shooting the proverbial fish in the barrel of the bankruptcy expert’s. Think about this. This sorriest excuse for a human being has been in office barely a year. Do I really need to recount all the lies, all the ignorance, all the legislative defeats?

And there is Paul Manfort, so very emblematic of the ultimate in an amoral, cynical approach to government. He was the perfect guy for the bankruptcy expert. They are so very alike, except for two things. Manafort’s illicit, ill-gotten gains are over and will be sending him to prison for life. And, as disgusting a human being as he might be, Manafort seemingly has real human emotions….such as, when you are totally and utterly screwed, you begin to crumble. After all, it wasn’t all that long ago he was running with the oligarch sharks, living the high life, feeling a false sense of security. But an ethical, tough-as-nails special counsel and former chief of the most respected, revered and feared agency — the FBI — who has the goods on you, shatters the myth of  impenetrability.

Paul Manafort has willfully tried to subvert the Constitution for his own monetary gain and, incidentally, the political gain of the bankruptcy expert and his anti-American ways. But Robert Mueller caught him. Paul Manafort, for all intents and purposes, is a dead man.