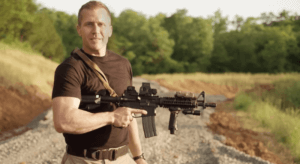 Republican Missouri Governor Eric Greitens is so finished and yet the ex-Navy Seal continues to Rambo on as if the citizens of the Show Me State (fitting name when you come to think of this guy’s transgressions) owe him something other than showing him the door.

Basically, the soon to be ex-governor turned out to be like so many other politicians who claimed to be a family man as he cheated on his wife. These are the creeps that parade their children and wife around as props, first,  to win elections and then later to remain in office. But the case of Greitens gets even creepier.

From The New York Times:  But while she was blindfolded and bound with tape to an exercise machine, she said, Mr. Greitens took a nude photograph of her without permission and threatened to publicize the image if she spoke about their affair.

Class act, don’t you think? Greitens, big surprise, denies the blackmail. But what he doesn’t get is that it almost doesn’t matter. There is something especially repugnant about a man having an affair while his wife is either pregnant or caring for a newborn. So you look at the red meat image he portrayed in his campaign commercials, that of the gun-toting tough guy, who is super-clean and ethical. And now everyone, everyone, knows what a complete and utter lie that was.

But men like this care about one thing…themselves. So he is totally blind to the reality that he has only path: to resign before politicians on both sides of the aisle kick him out, though the Democrats would secretly love to have him stay in office. Greitens and all the sordid details of his character, or lack thereof, will suck the air out of any GOP legislative agenda. Greitens best hope is to avoid conviction. Even for a politician, that’s setting the bar pretty low.