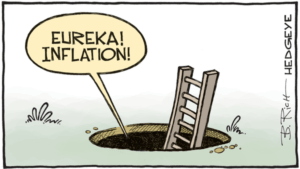 The bankruptcy expert calls himself a genius when it comes to debt. Since he is still afloat after disastrous financial decisions, it is safe to assume he found a way to run up the tab and stick others with the bill. Unfortunately, his plan to do the same with our country is likely to implode with soaring inflation. In short, he and his Republican enablers are providing a massive tax break of $1.5 trillion to those who need it the least….corporations who have been hiding their money in shell companies overseas and the top 1%. In case you think that somehow this is going to magically find its way into middle America, think again. About $200 billion has already been used by companies to buy back shares and increase dividends. All this does is provide even more money to those who, percentagewise, can’t or won’t churn this money back into the economy. But the bankruptcy expert’s colossal mistakes don’t stop there, according to the even-handed, non-partisan Robert J. Samuelson of the Washington Post.

Unlike Paul Krugman of the New York Times, who writes about the economy with a poisoned dagger for anything conservative or Republican, Samuelson has always offered objective and nuanced views on financial matters. It’s unfortunate that the brilliant Krugman can’t master the same and escape the partisan echo chamber. But Samuelson does and this is why his words are so important. He calls erring politicians to task no matter what their party affiliation may be.

His most recent column is a sober assessment of economic policy gone off track when it didn’t have to. The bankruptcy expert was handed a steadily growing economy, extremely low unemployment, extremely low inflation and a robust stock market that had more than doubled during his predecessor’s tenure. But if the past is prelude, we only need look at the many cataclysmic failures this petulant child forced on unsuspecting suppliers and investors in years gone by. He has always been about self-congratulation and enriching himself, the exact opposite of what is needed in a country so diverse as ours and where income inequality is simply and completely out of control.