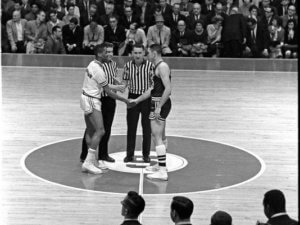 This is the time of year when we sports fans play make-believe and watch all the teenagers give it that ol’ college try for their millionaire coaches in the one, the only, NCAA College Basketball Tournament. We still want to believe there are student athletes and coaches who are selfless teachers. But the fact is that the best players are at college for their NBA audition and the coaches are CEOs, presiding over a ballooning group of mid-management types and endorsement deals. Consider this, according to USA Today, 66 college coaches make over $1 million, including 47 over $2 million and, get this, 14 taking home pay in excess of $3 million. This disproportionately older, white male club coach disproportionately young black players who have a salary of, well, nothing. But, still, if you can get beyond this close to total lie of professional college basketball, March Madness is intensely exciting. But way back in the day, it had, at times, more than excitement on the court. It had significance to society.

No better example of this significance was in the 1963 NCAA Tournament regional semifinals, when the Loyola Ramblers of Chicago went up against Mississippi State, in what was termed, “The Game of Change.” It’s truly a heartening story of how race relations took a step forward thanks to what was happening on court. Loyola started a minimum of three black players and sometimes all five. Today no one would even notice. Back then they did, especially the governor of Mississippi, who forbade the team to play Loyola in the Tournament.

It’s difficult to decide, and maybe not even that important, what the most heartening part of the story was. Was it the integrated Ramblers winning, on their way to what would eventually be the championship? Was it the white Mississippi State players defying their segregationist governor in order to play in the game? Or maybe it was the Mississippi State student body warmly welcoming their team back to campus after the tough loss. No matter which answer you may choose, the one thing on which we can all agree is this: It was genuinely one shining moment.