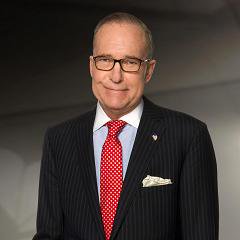 Either he has terrible judgment and/or no one reputable wants to work for him. Whatever the case may be, the bankruptcy expert made the call early in his term on such notable individuals as the incredible shrinking man, Dr. Ben Carson, appointing him Secretary of Housing and Urban Development, and Michael Flynn (recently turned felon) as National Security Adviser, who has since departed. It makes one ask just who is left to work for this occupant of the White House. And the answers are predictable: individuals whose careers were less than stellar outside their niche’ and thus ended up taking the popular path to notoriety and cash by talking nonsense as television pundits.

Last week it was the likable CNBC financial tout, Larry Kudlow, who seems to just never be right on anything to do with the economy or the stock market. But at least he’s not a mean-spirited jerk with an ax to grind out of personal animosity. Kudlow is likely going to be a harmless cheerleader and may actually instill a little humanity where there is an appalling void today. But anyone who has watched him or, for that matter, almost anyone else on CNBC, realizes there is no great depth of knowledge or insight to be offered into the economy.

As innocuous as Larry Kudlow may turn out to be, is how much uglier things will get with the bankruptcy expert’s hiring of attorney Joe diGenova. Petulant Joey has been pushing what his petulant child boss has done on many occasions: completely fabricated conspiracy theories with no basis in fact. In diGenova’s case, it’s that there is a secret society in the FBI out to get the bankruptcy expert. Wow!

It is the most cynical of the cynical, when these disgraceful human beings promote lies because a good portion of remaining supporters of this train wreck of a White House are too ill informed and ignorant to distinguish fact from fiction. So you can take to the bank that diGenova and company will trash anything and everything in our legal system to save the very sorry hide of the bankruptcy expert, the country be damned.