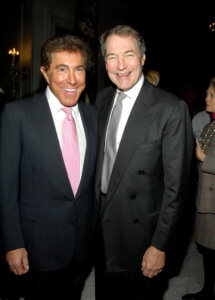 I look at this photo and think…..

“Hey, Steve, did I ever tell you the magical effect that my open bathrobe had on young women, the ones that naively came to me looking for jobs? Like their qualifications mattered to me. Get real.”

“No, you haven’t Charlie, but I can only imagine. As for me, I never even bothered with pretense. After all, it’s Vegas, not exactly a chapel of virtue. I just did what I wanted. Hell, I might be a creep but I’m a billionaire casino creep, who made myself respectable to the high society types by funding your show, on PBS, of all places! Some lowly honest worker wasn’t going to stop me from taking what I wanted. No way.”

“I hope you know how appreciative I have been of your cash, ya know — support; certainly enabled me to feed my expensive tastes, make me feel special. You know, Steve, when you think about it, we each were, like, the man! We had so much sway, so much privilege; everybody wanted to be in our orbit. I mean, we were like nobody else. We could do whatever we wanted. Only in America!”

“You got that right, Charlie. Man, you had it down with all your high-brow guests talking about those heavy, deep subjects. But all the time, you hound you, you were on the prowl.”

“You’re too kind about my show, Steve. Actually, but I don’t like to mention it much; it was my producer who made it all happen, made it all work. She basically did everything, even covered up for me.”

“Yep, Charlie, not like those women who couldn’t just cash a check and keep their big mouths shut .”

Born just three weeks apart in 1942, these 76-year-old white men of wealth, Steve Wynn and Charlie Rose, are effectively and forever severed from the world they once knew, they once controlled. R.I.P.