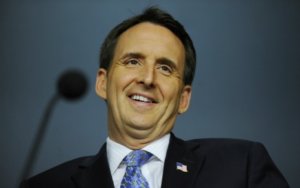 You may remember the incredibly empty politician by the name of Tim Pawlenty. He was the aw-shucks type of fraud running as the everyman for President in 2011, having been the governor of Minnesota, which is usually a state much smarter than its choice in Pawlenty. He was crushed, his candidacy never even making it into 2012. But Pawlenty did find the gravy train, as he earned millions as a DC lobbyist. Funny how that works, isn’t it? Now, he’s decided to run for governor of Minnesota again.

From the psychosis that is Tim Pawlenty…

Although I’d hoped he could have risen to the occasion, it’s clear Trump is unwilling or unable to demonstrate even the most basic level of discipline, character and judgment necessary to lead our great nation. He is unsound, uninformed, unhinged and unfit to be president of the United States, and I am withdrawing my support for him.

Then, magically, a short time later….

Wow! Now there’s a statesman and pillar of ethics and conviction.

If you’re a Democrat in Minnesota, you have just got to be dancing in the streets of St. Paul right now. You see, in Minnesota, most Democrats are conservative in nature and most Republicans are giving in nature. But what backers of both parties have abhorred is blatant, rampant phoniness. And Pawlenty is that is spades, and then some.

The word from some political insiders is that Pawlenty wouldn’t have decided to run unless he was pretty sure he was going to win. Good luck with that, Timmy, my boy. My guess is that you’re not even going to get your party’s nomination. But you won’t be the first, nor definitely the last, completely delusional, self-absorbed candidate. Pretty much goes with the territory.