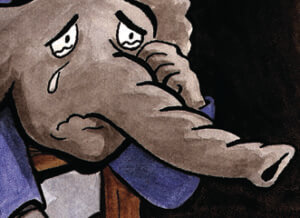 With an eternity left until the mid-term elections, it is premature for Democrats to begin their victory dance. Likewise, some on the far left of the party, in some unbelievably quixotic leap of faith, feel the country is actually hungering for their form of liberalism with sprinklings of socialism. Somehow these visionaries have still yet to figure out that this country leans center-right. Still, with Paul Ryan jumping ship, the Republicans public persona looks increasingly like the loony fringe of the bankruptcy expert. So as much as the Elizabeth Warren faction of the Democrat Party lives in another world unknown to most, what’s remaining in what was once the party of Lincoln has been exposed as the empty, vengeful vessel it is. I mean, when you lose Alabama, is there truly any great hope for the GOP in the rest of the country?

The party is rudderless. In the petulant, tweeting child vacuum that is the bankruptcy expert, no Republican stepped up as a counterbalance. Many thought Ryan would but as conservative columnist Ross Douthat wrote in the New York Times today, he was never a visionary and he was always a party man. Beyond Ryan, it’s been quite amazing to watch the near total capitulation of the Republican Party to the antithesis of American bedrock principles.  It’s also been quite amazing to see how many Americans just don’t care about these principles if they see advantage for their tribe in doing so. That is downright scary. But it should be pointed out that the Democrats did the same when their president lied under oath and yet they still circled the wagons around him.

In perspective, anything that JFK, LBJ, Nixon or Clinton did unseemly as president pales in comparison to the full frontal assault by the orange one on our democracy. I guess we’ll see in November if that even matters anymore.