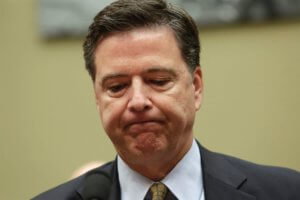 I have written numerous columns about James Comey, including his testifying to Congress before he became the Director of the FBI.

I felt that, by and large, he was the model FBI Director. Well before the bankruptcy expert was on the radar, even before Comey headed the FBI, he told truth to power when the law of the land was being threatened by presidents. He was what one wanted in the chief of such a powerful agency, which has been a primary protector of America and its principles. I maintained this conviction in his leadership just days before the 2016 election, when he had made it known that additional Hillary Clinton emails were being investigated.

Today, upon the release of his book, I still feel Comey did the right thing in what was an impossible situation. There was no way he could not mention the Clinton investigation. Some have criticized him for not doing the same with the potential Russian interference in the election and its possible links with some of those in the bankruptcy expert’s camp. But even President Obama did not want to publicize this. It seems almost quaint today, but both Obama and Comey did not want to be portrayed as politicizing the work of the FBI. And, frankly, that was also the right call. Plus, after seeing the depths to which this disaster in the White House has sunk and yet still has rock solid support of Republicans, does anyone think a mention of Russian collusion would have changed any of these closed tribal minds? Nope, they were to busy hatin’ on Hillary to care about anything as esoteric as basic American freedoms. The bankruptcy expert would have used it to further rally his troops by calling it fake news and trying to undermine the legitimacy of the free press.

I write all of the above to contrast my previous thoughts about Comey with what they are today. James Comey, succumbing to the sick moment we’re in socially and politically, goes low in his book. By writing about the bankruptcy expert’s fake tan, smaller-in-person appearance and salacious, unsubstantiated rumors of bizarre sexual activity; Comey undermines his own stature as a pillar of American principles. His could have been a serious book about the very real threat our democracy is facing right now. He could have left out all the tabloid garbage, skipped the talk show circuit, with its endless and superficial hype, and done a 2-3 hour interview on C-Span’s Book TV. He would have sold just about as many books. He also would have maintained and enhanced his reputation for serving America apolitically and with honor. In short, he would have walled off what is almost a sacred institution from the timeliness and sordidness of a crumbling political system. But he didn’t. Comey decided to take a page or two from the bankruptcy expert’s playbook of callousness and expediency. And that is sad.