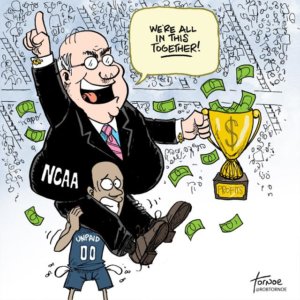 The Men’s NCAA College Basketball Tournament, aka March Madness, is great drama and therefore great sport. But college basketball at this level, the best of the best in Division I, is diseased. Huge companies are making boatloads of money off of unpaid players. Coaches are making ungodly sums off of these same unpaid players. Meanwhile, universities fund programs off of these players as well. Scandals and corruption abound. Into this backdrop, the NCAA comprised a panel, headed by Condoleezza Rice, to address the many ills of college basketball. Its conclusions were made public today and will likely make little or no impact.

Yes, the NBA and universities will finally be pressured enough to eliminate the “one and done” syndrome, in which players are auditioning for a lofty pro contract. But it is difficult to see how this will do anything except hurt those unpaid players even more. It won’t hurt any of those who make their (usually lucrative) living off the players.

The change has to come from the top. Millionaire coaches have to take their heads out of their rarefied clouds and decide to be teachers who are adequately, not obscenely, compensated. University and Association officials, also extremely well paid, have to lose the bias that their livelihood is more important than what are now their unpaid employees. Coaches, administrators and NBA management and owners have created and continue to nurture and milk the epitome of a hypocritical system. There is a fix and it’s not all that complicated.

Over a billion dollars in revenue is generated via college basketball. Give the players just 2% of the revenue, 1% in cash on which to live and the other 1% in form of an IRA. Any financial analyst will tell you that the number of years money is invested is as important as total amount invested. These players are in their teens and early 20s. If they each received just $25,000 for their playing days in college and it was invested in an IRA, with the magic of compound interest and close to 40 years of compounding, each player would have over a half-million dollars. Or what Coach K makes in a month.