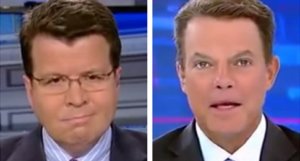 The echo chamber grows deeper and more resilient. I’m speaking of the oxymoron of niche’ journalism. I mean, you really have to be a blinded liberal to listen to, say, Rachel Maddow of MSNBC for much more than a nanosecond. I don’t know what you have to be to watch CNN, the showbiz-reality tv network of politics. But, of course, it’s shooting fish in a barrel to critique the abundant ignorance, much less bias, of Fox News. And yet.

And yet, there are Shepard Smith and Neil Cavuto. Both have been sterling examples of speaking truth to power, especially the type of power spewing forth from the bankruptcy expert. Cavuto, for instance, recently broadcast that the stink, the swamp, was coming directly from 1600 Pennsylvania Avenue.

What Smith and Cavuto say makes more of an impact than all the other talking heads on all the other networks combined, for these others all pretty much preach to the converted. But the opposite is true on Fox News, which has been a shill for the orange one basically forever. Consistently, though, another story is being told.

I know this may sound heretical, but with the likes of Shepard Smith and Neil Cavuto, and I would also include Chris Wallace, Fox News is the most impacting, most consequential news outlet in the country. That is, if it continues to employ the likes of Smith, Cavuto and Wallace. Will this be the case? I think so.

The Murdochs run Fox and, love ’em or hate ’em, Daddy and Sons are the shrewdest of businessmen. They know the far right wing loony viewers, who hate Smith and Cavuto for accurately reporting on the train wreck at the White House, aren’t leaving Fox for Cooper Anderson at CNN, to say nothing of Rachel Maddow at CNBC. Oh. My. God. No! Further, the Murdochs know they attract a new demographic, and more numbers to sell advertisers, by having Smith and Cavuto. And what serves the Murdochs’ bottom line, just may serve the country as well.