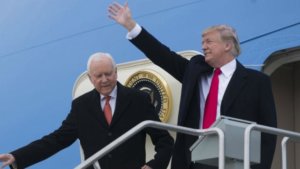 All this says to me is just how corrupt and out of touch our elderly House and Senate are. They live in their privileged bubble, never coming close to realizing the cancer they have ignited in the country. Orrin Hatch. Mormon. Family values. Remember, Mormons, having been persecuted themselves (for their males’ libidos and their lust for numerous wives), were fairly forthright in their support of the civil rights movement. Mitt Romney’s dad, George Romney, who was a presidential candidate and the governor of Michigan in the ’60s, was, to his credit, anti-segregation. And Mitt, even if you haven’t agreed with all of his policies — and who does agree with all of anyone’s policies? — was and is a class act when it comes to immigration and civil rights. In short, no matter the breathless protestations of liberals in 2012 against Romney, he was and is a statesman. But this does not change the fact that Orrin Hatch, like so many others, are but a caricature of a politician. Empty. Hollow. Amoral. They have forgotten long ago just why the hell they’re there in the first place.

And that is exactly why the candor and self-admission of missteps by a giant of a man called John McCain is so rare and yet so essential to this country. Just who in the Senate can come close to the moral integrity of John McCain?

Here’s my take: This country has been blessed with riches that have made it way too easy to believe we deserve as much. We don’t. Orrin Hatch proves that. This country, given so very much through no fault of its own, could have been so much more. But it turns out we’re controlled by small-minded, mainly old white guys. And, man, they don’t give up any shred of privilege easily.