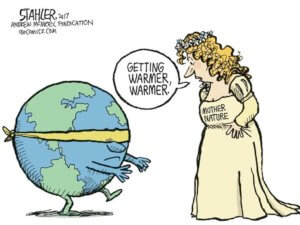 Having lived in south Florida for many years, there have been two major changes I’ve witnessed. First, the year-round population has dramatically increased. In the past, during the summer, it felt like you had the place to yourself. Those days are way over. It’s never not busy, never not congested in south Florida.

The second major change has been the increase in flooding. Many have mistakenly referred to climate change as causing extreme weather in south Florida. In reality, hurricanes have been few and far between, in an historical perspective, over the past twenty-five years. But the flooding continues to increase and is especially noticeable when the weather is beautiful and yet the streets are nonetheless under water. It is so alarming that competing media organizations have banded together to demand that government officials do something about it…now!

Then there is San Francisco. As difficult as it would be for south Florida to prepare for and handle its increasing flooding, what could San Francisco do when the next big earthquake hit? Well, nothing, really. The bottom line is that the external beauty of the Bay Area masks a ravenous cancerous internally. It must be comforting to have a relatively new, state-of-the-art building in San Francisco……sinking. And even more than expected!

But realistically just about every coastal area in the United States is literally in deep. Think how a relatively limited storm overwhelmed the Jersey Shore and New York, to say nothing of the rains in biblical proportion that swamped Houston. It certainly does seem that it is just a matter of time, a speck in the history of the universe, that life as we know it will change forever. So I guess this makes me both a believer in climate change and a skeptic that we mere mortals can do much about it. Except move to Nebraska.