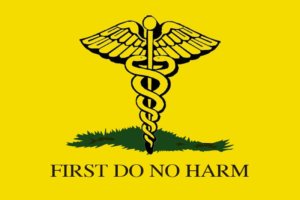 The two news stories that have been dominating my thoughts this week are the bankruptcy expert’s approval ratings at 45% and the vote in Ireland on whether or not to repeal what is pretty much a total prohibition on abortion. With the latter, as of this moment according to the Irish Times, there was a landslide victory for repeal. Both stories strike me as illustrative of moral relativism. It is not a quest for a higher good but a worldly grab of self-interest.

In Ireland’s case, it is not so much the repeal of this exact prohibition of abortion. One could argue the law was indeed draconian. But in the process of repealing what may well be a bad law, there was little talk, if any, on the repeal side for a reasonable law. Yes, the Minister for Health Simon Harris wants to introduce legislation allowing abortion on demand up to 12 weeks into the pregnancy, but the campaigning for repeal promoted the essence of abortion. And so I thought of doctors being taught to do no harm and students taught the virtue in opting for the morally safer course. There is something organically repulsive when humanity turns its back on such bedrock principles.

Which leads me to the bankruptcy expert and his 45% approval ratings. From the ugliness of his racist birther claims, to his total disregard for basic truth; this is simply a terrible, immoral human being. But even with this being the case, almost half of Americans think he’s doing just fine, thank you very much. It’s as if these Americans are looking at their other fellow Americans who have been savaged by the bankruptcy expert — think blacks and Muslims, to name just two — and saying: You. Just. Don’t. Matter. Which means, in the final analysis, none of us really matter.