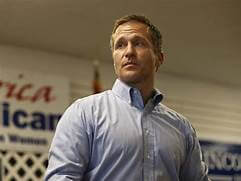 Way back in February I wrote that the political career of the Missouri governor was over and how he seemed to be the only one in the universe who didn’t quite grasp this etched-in-stone fact. Finally, today, Eric Gritens announced he will resign as governor of the Show Me state. Possibly, every pun intended as he seemed adept at photography of a woman in bondage, who was not his pregnant-at-the-time wife. The photographed woman said the photo was forced upon her; he says otherwise. Just a warm, fuzzy story, don’t you think?

But the tale of woe for Mr. Greitens now extends to the possibility he illegally used a database of a non-profit to fund raise, no doubt for a meteoric political ascendancy he was planning for himself. Oh well, best laid plans, so to speak. You might think that EG would be a bit remorseful, apologetic, but you would be wrong. Instead he complains that politicians (remarkably bi-partisan, I might add) and the media have been the cause of strain on his family. Really? But it gets better.

The soon-to-be ex-governor of the state of Missouri has also fallen back on one of all-time great defenses of the accused. You see, according to him, it isn’t that he has done anything all that wrong or illegal, though this one heckuva guy has said he’s not perfect, thank you very much. Nope, it’s not that he has a moral capacity of a gnat. No, it’s that <drum roll, please!> he has been victim of a witch hunt, I tell you!

And so goes the tale of yet another power-obsessed individual wanting to impose his sick will on the community he is supposed to be serving. I mean, who, after doing so many terrible things, would not beg for forgiveness and instead cry out as a petulant child saying it’s a witch hunt? Just who? Exactly.