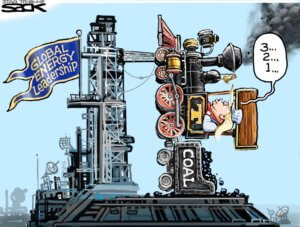 Greg Ip is a superb journalist for the Wall Street Journal, not exactly a liberal media outlet. Read the facts he’s gathered about the bankruptcy expert’s love affair with coal. On all counts, from the economy to the health of the people in coal country, coal is a total dead end. Does the bankruptcy expert continue on this dead end so he can keep the votes of those who are either too ill-informed to know better or too desperate to make a living at any cost? Ask yourself, what so-called leader would do such a thing to his followers?

A Costly, Deadly Obsession With Coal

President Donald Trump’s eﬀorts to revive coal mining have been criticized as picking winners. Actually, it’s more like picking losers: coal has become a sunset industry as cleaner energy sources rapidly get cheaper. If Mr. Trump succeeds at reversing the tide, it will come at a steep price, in both dollars and lives, most tragically for the coal miners he purports to help.

Centuries ago, coal was a miracle material. Cleaner, safer and more eﬃcient than wood, it made the Industrial Revolution, steam power and electriﬁcation possible. In much of the world it remains ridiculously plentiful and will be the power generation fuel of choice for years to come.

In the U.S., though, coal is headed toward obsolescence. Thanks to the fracking revolution, natural-gas-fueled power plants are now cheaper to build and operate than coal-ﬁred plants. Solar- and wind-generated power now costs less per kilowatt-hour to produce than coal.

Renewables cost slightly more than coal when you include the cost of backup power since the sun doesn’t always shine and wind doesn’t always blow, according to the Energy Policy Institute at the University of Chicago. But as innovation in shale gas, wind and solar continues to drive down costs, coal will lose whatever advantages it has now.

Seeking to postpone the inevitable, Energy Secretary Rick Perry last year asked the Federal Energy Regulatory Commission to compel utilities to buy power from struggling coal and nuclear stations. Because they store fuel on site, he said, they reinforce the electrical grid against outages.

As countless witnesses told FERC, the administration’s argument is baseless. Fuel supply problems account for an inﬁnitesimally small share of electrical outages and when supply problems do crop up, they are usually coal’s fault. During Hurricane Harvey last summer, two Houston-area coal-fueled generating units had to switch to natural gas because their coal pile was saturated with rain.

Meanwhile, propping up uneconomical coal and nuclear plants would cost ratepayers a fortune. PJM Interconnection, which operates the wholesale electricity market serving 13 states and the District of Columbia, would bear $1.7 billion to $11 billion a year of added cost for coal-generated power and $1.4 billion to $22 billion for nuclear-generated power, according to PJM’s independent monitor.

These are just the direct, ﬁnancial costs. Coal carries huge nonﬁnancial costs. For example, incorporating the “social” cost of climate change due to methane and carbon dioxide emissions, Michael Greenstone, director of the Energy Policy Institute, estimates coal is more expensive than any other power source, and nuclear becomes cheaper than solar and wind (because while the latter two don’t emit carbon they require gas-ﬁred backup power, which does).

Finally, there is the cost to human life. Burning coal emits soot that even in tiny quantities causes cardiovascular and respiratory illness. In one study, Mr. Greenstone and his co-authors found that in China, which is currently negotiating to buy more U.S. coal, life expectancy is reduced by three years in households that use subsidized coal in the winter. The toll in the U.S., where emission standards are tougher, is much smaller, but still measurable.

The miners themselves pay the highest price. Overexposure to coal mine dust leads to black lung disease—inﬂammation and scarring of the lungs, which eventually leads to organ damage and failure, and premature death.

More than 2,000 cases of progressive massive ﬁbrosis (PMF), the disease’s most lethal form, have been reported since 2000, according to new research by Kirsten Almberg of the University of Illinois at Chicago and seven co-authors.

The incidence of the disease fell sharply after federal legislation mandated stricter dust controls in 1969, but is rising sharply again. The proportion of long-tenured miners in central Appalachia with PMF has shot from 1% in 2004 to 5% in 2015, according to a study by David Blackley of the National Institute for Occupational Safety and Health, part of the Centers for Disease Control and Prevention, and four co-authors. But that only counts cases picked up by a federal surveillance program. Experts believe many more are being missed.

Lee Petsonk, a specialist in black lung disease at the West Virginia University School of Medicine, says the disease hits sooner, progresses faster, and is more lethal than 20 years ago; younger miners commonly lose 30 years of life to it. He thinks this is because new mining techniques cause miners to inhale more dust, and more toxic types of dust, such as silica from the surrounding rock. The disease is preventable with the right equipment and practices, and mining companies claim to meet tough federal dust-control standards, Dr. Petsonk says. But the dust-choked lungs he sees in autopsies suggest conditions are getting worse.

“I’ve seen a lot of people die from a lot of diseases and this is one of the most cruel ways to go,” says Dr. Petsonk. “It kills your breath slowly over months or years, and eventually everything you can do in your life, to take care of yourself and your family, is stolen from you.” If work- related illness killed at the same rate in any other industry, he said, “a national emergency would be declared.”

Write to Greg Ip at greg.ip@wsj.com