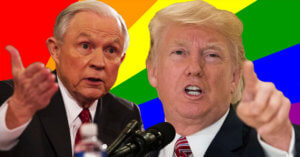 Ok, maybe you did think it could get worse with the bankruptcy expert and his cohort of the ethically and intellectually challenged. We’ll get to the ultimate in mean-spiritedness shortly. But sometimes what’s overlooked with this group is that they’re simply not very bright. Case in the point: the guy at the top.

In the past he has spoken about judges signing bills…really! But when he decided to be a bully about global trade, he got, well, just about everything wrong. In a simple, yet insightful, column published on CNBC.com, John W. Schoen details the most basic math in determining the actual amount of the trade deficit. How basic? 505 – 375 = 500! Schoen also points out that with, for example – Apple, a phone manufactured in China has various parts from numerous countries and then produces wealth, via work and sales, for Americans. So to use the cost of the phone exported from China to the United States as the sole economic factor is grossly misleading.

But as ignorance in this administration seemingly has no bounds, the mean spiritedness within is even greater. As has been well documented now, the bankruptcy expert and his Attorney General Jeff Sessions decided to bully children by separating them from their parents at the border. Even many previously spineless Republicans have cried foul on this one. This is pain being inflicted by so-called adults so as to use children as bargaining chips. Making this even sicker than it is, Sessions has invoked a biblical passage as justification. He is literally wrong. He is spiritually bankrupt.

And so it goes. One keeps waiting for the proverbial straw that breaks the camel’s back. Maybe this is it. Get the mid-terms over and then it is time for Republicans and Democrats to join forces. The willful harming of innocent children is, plain and simple, a crime against humanity. He shouldn’t just be impeached, he should be sent to prison.