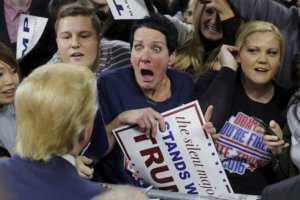 Ever since the bankruptcy expert lost the popular vote by 2.8 million, in an election tainted by Russian interference in producing truly fake news, a solid core of his followers have remained steadfast in his corner. I’m not talking about the wealthy who have had their taxes slashed in what is a massive cash grab. It’s pretty understandable, if not still tragically sad, that this well heeled group, in its avarice, would overlook the bankruptcy expert’s embrace and promotion of racism and totalitarianism. No, the group I’m talking about are those individuals who are blue collar and white. This group was duped into believing the bankruptcy expert, a pampered and petulant child of privilege, was somehow sympatico with them. As anyone who doesn’t get their news solely from Fox could tell you, nothing could be further from the truth.

Today, that bastion of conservatism and the free market, the Wall Street Journal, published “Chinese Tariffs Hit Trump Counties Harder”, a most damning story of just how the absurd trade war started by the bankruptcy expert is most negatively impacting his own base. Here’s an excerpt:

The fallout from President Donald Trump’s tariffs and China’s countertariffs—which formally went into effect on Friday—will have the greatest impact on the U.S. counties that voted Mr. Trump into office.

And so it is. The bankruptcy expert’s followers won’t know what hit them. But they certainly should have; they had ample warning, if only they had changed the channel.