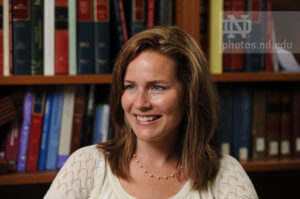 Her name is Amy Coney Barrett, 46, and she is a judge on the United States Court of Appeals for the Seventh District. She has already been indoctrinated under fire for her Catholicism by California Senator Dianne Feinstein, when in hearings for her appointment to the Appeals Court. If ever the hypocrisy of the left is on display, it is when the religion of amoral secularism is promoted and those who stand in its way are demonized.

But what the general public will see with Barrett is a reasonable and, dare I say, compassionate individual. In addition to her scholarly and professional achievements, she is a mother of seven; five biological and two adopted from Haiti. Let’s see the Democrats look like a mirror image of their soulless counterparts across the aisle as they try to savage her, should she be nominated.

This move just makes too much sense for the bankruptcy expert. The other supposed frontrunner, Brett Kavanaugh, would be the mainstream Republican choice, in that , among other things, he worked in the George W. Bush administration. That’s not a resume the current occupant of the White House is enamored. Likewise, Kavanaugh is a man. The bankruptcy expert would love the optics of his nominating a woman to the Supreme Court.

Lastly, and this is where the demagoguery of the Democrats is most exposed, Barrett has stated that the core right to abortion as granted in Roe v. Wade would not be overturned. She went on to say that some restrictions when it comes to late-term abortions, abortions which only North Korea, China and the United States permit, could come under review. The abortion absolutist Democrats will kick and scream, but the reality is that America is much more in line with Barrett’s thinking.

In approximate terms, the pro-abortion and anti-abortion absolutists each make up less than a quarter of the electorate, whereas over half of Americans feel abortion should be legal but with restrictions once into the second trimester. Because extremists on both sides of the issue yell the loudest, and since the media knows people respond to headlines more than granular detail, the abortion argument is falsely presented as an issue with two sides. In reality, there are three sides, and Barrett represents that third side, which Feinstein and Durbin and all the Democrat senators will try to obscure. On this issue, the Democrats are tyrannical. Barrett, if nominated, will expose this and give the bankruptcy expert a rare victory on principle.