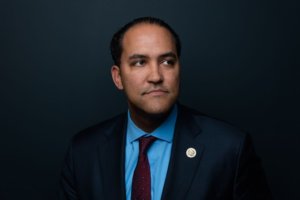 Will Hurd is a congressman from the 23rd District of Texas. He also happens to be a former CIA officer. Here’s what he wrote in the New York Times….

Over the course of my career as an undercover officer in the C.I.A., I saw Russian intelligence manipulate many people. I never thought I would see the day when an American president would be one of them.

The president’s failure to defend the United States intelligence community’s unanimous conclusions of Russian meddling in the 2016 election and condemn Russian covert counterinfluence campaigns and his standing idle on the world stage while a Russian dictator spouted lies confused many but should concern all Americans. By playing into Vladimir Putin’s hands, the leader of the free world actively participated in a Russian disinformation campaign that legitimized Russian denial and weakened the credibility of the United States to both our friends and foes abroad.

As a member of Congress, a coequal branch of government designed by our founders to provide checks and balances on the executive branch, I believe that lawmakers must fulfill our oversight duty as well as keep the American people informed of the current danger.

Somehow many Americans have forgotten that Russia is our adversary, not our ally, and the reasons for today’s tensions go back much farther than the 2016 election. For more than a decade, Russia has meddled in elections around the world, supported brutal dictators and invaded sovereign nations — all to the detriment of United States interests. Mitt Romney had it right in 2012 when he told President Barack Obama that Russia was “without  question our No. 1 geopolitical foe.”

Our intelligence community has concluded with high confidence that President Putin personally ordered his security services to undertake an influence campaign aimed at undermining confidence in American democracy to sow chaos in our electoral system. Russia’s efforts to hack 7/20/2018 Opinion | Trump Is Being Manipulated by Putin. What Should We Do? – The New York Times https://www.nytimes.com/2018/07/19/opinion/trump-russia-putin-republican-congress.html?action=click&pgtype=Homepage&clickSource=story-headin… 2/3 political organizations and state election boards are well documented, as are the Russian disinformation campaigns on social media platforms.

Russia is an adversary not just of the United States but of freedom-loving people everywhere. Disinformation and chaos is a Russian art form developed during the Soviet era that Russia has now updated using modern tools. The result has been Russian disinformation spreading like a virus throughout the Western world. From elections in Britain, France and Montenegro to invasions of Georgia and Ukraine, Moscow has pursued an aggressive foreign policy aimed at spreading disorder and expanding Russian influence in states formerly under the heel of Soviet Communism. These efforts weaken our allies and strengthen those who seek to undermine the democratic order that has helped prevent another world war in Europe since 1945. Moreover, the threat of Russian meddling in United States elections is not behind us. Just last week, Dan Coats, the director of national intelligence, cautioned that “the warning lights are blinking red” that Russia and other adversaries will undertake further cyberattacks on our digital infrastructure. This includes many of the energy companies in my home district in South and West Texas.

Many of my constituents have asked what Congress can do to protect the American people from Russian threats and provide a check on the executive branch’s demonstration in Helsinki. If necessary, Congress should take the lead on European security issues as it has in recent years. For example, during the Obama administration, Congress repeatedly pressed the president — using the power of the purse through appropriations bills — to send lethal weaponry to assist Ukraine in its fight against Russian-backed separatists.

Last year, Congress passed the Countering America’s Adversaries Through Sanctions Act to impose severe sanctions on Russia as retaliation for its meddling in our presidential election. And this year, the House passed the Ukraine Cybersecurity Cooperation Act to improve Ukraine’s ability to respond to Russian-supported disinformation and propaganda efforts. I am also encouraged that the Senate Committee on Foreign Relations has asked Secretary of State MikePompeo to testify on the president’s recent meetings with both Kim Jong-un and Vladimir Putin.

Additionally, Congress must act to give the men and women of our intelligence agencies the tools they need to confront Moscow and prevent this from happening in the future. We can start by sending the Intelligence Authorization Act to the president’s desk, which authorizes funding to support critical national security programs across the intelligence community. It also requires regular public reports on foreign threats to federal election campaigns before those elections take place, mandatory notification to Congress within 14 days after a determination has been made with moderate or high confidence that a foreign cyber-intrusion or active measures campaign to influence a federal election has taken place, and reports to the House and Senate Intelligence  Committees on past and continuing Russian influence campaigns.

As a member of the House Oversight and Government Reform Committee, I strongly believe in the importance of Congress’s oversight responsibilities and will work with my colleagues to ensure that the administration is taking the Russian threat seriously. Without action, we risk losing further credibility in international negotiations with both our friends and foes on critical trade deals, military alliances and nuclear arms.

In this dangerous geopolitical environment, we must be both vigilant and strong in responding to foreign threats. The challenges posed by Russia are no different, and I hope the president shares my conviction that American strength, not weakness, is the best way to preserve a secure world in the face of adversaries like Russia.