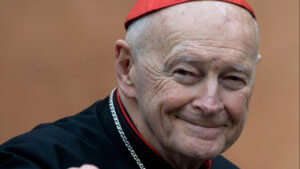 Cardinal Theodore McCarrick, 88, archbishop of Washington, has resigned his post amid a sexual abuse scandal. And when reading the words about McCarrick by conservative columnist Ross Douthat in the New York Times published earlier in the week, it is a powerful and tragic reminder how the high-ranking politicians of the Catholic Church have failed their ministries. Again. Again. And again.

I do not flippantly use the term “politician”. It is painfully apparent that the Vatican and the overall power structure of the Church have been overridingly self-serving. One might even be able to accept some of this if it were simply patronage — cushy jobs, travel perks, lofty promotions. But, no, it went into the utter and complete degradation of those innocents with whom they were entrusted. It is the essence of what sickness is, of what evil is.

I have thought for years, ever since I was in Catholic grade school, how the Church almost begs for sexual perversity by being so obsessed with limiting natural forms of sexuality. Objectively, this approach to sexuality seems to have almost been a hammer the clergy held over the laity throughout most of its history. But, in reality and hypocritically so, large numbers of the clergy have not only been sexually active, they have been sexually abusive. And the greatest sin of all is that those in power who could have made a difference combating sexual abuse did little or did nothing except try to hide it.

I can’t be a psychoanalyst for the now-defrocked McCarrick. I don’t know if people like him are drawn to the Church because they have an environment in which they can live out their sickness. Or maybe it is their denial of intuitive sexuality that devolves into perversion. All I do know is that there has been an epidemic of powerful men, from the movies to Wall Street to television to corporate board rooms, sexually abusing subordinates. But nowhere has this been more of the culture than in the Catholic Church, a place that should have been a haven from such evil. Lord have mercy. Because I don’t see how the victims ever could.