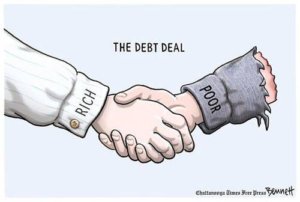 Only the bankruptcy expert could massively add to the country’s debt during a non-recessionary period of time. The catalyst for this explosion of debt was the absurd and reckless cash giveaway to the richest of the rich, masquerading as tax reform. If this failed administration gets its way, they’ll give away another $100 billion to the ultra-wealthy by allowing capital gains to be determined with the cost basis including a percentage for inflation. Of course, inflation is already baked into the selling price. But, oh well, details get in the way of economic sanity. In short, the bankruptcy expert and his enablers are snake oil salesmen selling what has always been the total lie of tax cuts paying for themselves by expanding the country’s economic engine. When a billionaire gets an extra $100 million, he keeps it. When $100 million is given the poor and needy, it immediately gets injected into the economy. So what’s the deal with giving billions of dollars to the rich? The answer is very ugly.

When the economy falls into recession by 2020 and there is already a mountain of debt, there will be little if any chance for an economic stimulus to make an impact. This will leave only one alternative: to gut spending. And where do you think the tax cutters of today, those making the 1% even richer, will go to gut that spending? I’ll give you one guess and it certainly isn’t cutting back the incessant cash giveaway to the rich. Nope, they’ll be going after social programs, from food stamps to education and everything in between. It makes one realize just how increasingly heartless a group of individuals can become as they bestow more riches upon themselves, further walling themselves off from mainstream America. Somehow this group has convinced themselves that they should feel aggrieved in a system that is rigged to benefit them to the detriment of others. It is so time for a reality check.