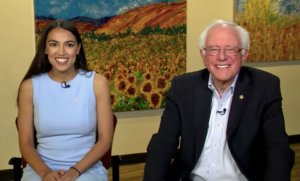 28-year-old Alexandria Ocasio-Cortez, by virtue of her “upset” Democrat primary victory in an ultra-liberal New York district, has become the darling of the anti-intellectual far left. Though not anywhere near as mean-spirited and venomous as the anti-intellectual far right, the fact remains the anti-intellectual far left is fact and truth challenged, as evidenced by recent Ocasio-Cortez statements documented by the Washington Post. Now, I don’t want to commit the sin of practicing moral relativism and equate the racism and anti-Americanism of old Racoon Eyes himself, the bankruptcy expert, with that of Ocasio-Cortez simply making up classist statements that may be emotionally satisfying but intellectually hollow, if not entirely false. That said, it would be good if Democrats didn’t set the bar as low as the current squatter in the White House. Will they? Probably.

The Democrats should romp home come this November, but they might not be able to get out of their own way. Way too many Democrats are veering Bernie Sanders-like to incoherent democratic socialism, whatever the hell that is. The people who will decide this election really don’t want it to be between two sets of crazies. Both sides of this equation are, well, lazy, at least intellectually so. They rely on emotion because substance is so yesterday. It’s been an interesting development in this country that experience and expertise are now considered liabilities.

Going forward the Democrats should preach an uplifting and positive centrist, middle and working class sermon. They should open their eyes long enough to see how the Ocasio-Cortez bandwagon had no wheels outside the confines of New York. Likewise, the Democrats, at least a few of them, should step up and publicly back Brett Kavanaugh’s nomination to the Supreme Court. He is eminently qualified and possesses integrity and character. The Democrats need to escape their echo chamber and pick their battles wisely. For the country’s sake, let’s hope they do.