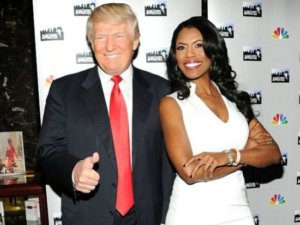 The bankruptcy expert called her a lowlife and maybe she is. Of course, he hired her and a virtual avalanche of other individuals fitting the same description. Think Paul Manafort, Corey Lewandowski, Michael Flynn, Stormy Daniels. Wow! What a great CEO this guy is!

Obviously no one would want Omarosa Manigault Newman as a character witness, as a recent New York Times column details.

But, on the other hand, she does have actual recordings of the henchmen who masquerade as government officials. Thank you, Mr. Kelly, Chief of Staff.

And so it goes. Still, the majority of Republicans are amoral and unethical enablers and supporters of this abomination of a human being, someone who backs the murderous thug Vlad over our country’s security agents. Someone who dog whistles to racists, obviously not the brightest group in the world but they sure are loyal. Someone who truly is a petulant child with his utterly juvenile pouts about people who might disagree with him, maybe even — dare we say? — criticize him?

At some point, this dictator wannabe will either be impeached or resign….the evidence of his ever-increasing mountain of anti-Americanism will come crashing down on Old Racoon Eyes. But this won’t erase the reality that tens of millions of Americans are alright with racism, are alright with trying to blow up free speech and true journalism, are alright with looking the other way as the White House makes nice with Vlad Putin. All these Americans selfishly care more about their own self interests and their tribe than the tapestry that is America. Shame on them.

Each one of us, excluding Native Americans, got to this country from somewhere else. When you think about it, what a miracle this country was. It became what it was because of the best people from all over the world believing they had a shot here to make a life without limits, free from oppression and tyranny. And, Jesus, it worked! And yet the bankruptcy expert and his enablers spit on this core American ideal. Sad.