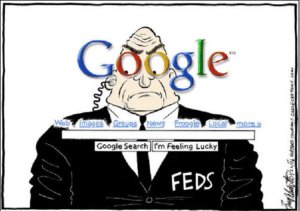 Way back in the day it was the once unthinkable break-up of the Bell System. The company had become so dominant it was deemed necessary to break it up. But the Bell System had virtually no personal information on its customers. Fast forward to today and Google, what do we have? We have a search engine which much more resembles the Yellow Pages of decades ago than a digital library. It’s taken a basic question and prioritized commercial revenue derived from that question instead of accurately answering the question. But it has gotten even worse than this.

Recently Google has seemingly decided to play nice with China and censorship. Think about that. Google is willing to capitulate to anti-democratic forces to make a buck. Google would not just censor its offering to placate the Chinese government, it would be willing to hand over personal information the government as well. This is so terribly rotten even Google employees have begun protesting against their own company. All Americans should protest as well and ask for Congressional hearings into Google and its alarmingly negative impact on our democracy, as evidenced by its alarming neglect of democratic standards in its worldwide business practices. In essence, it’s arming the Chinese government with digitized weaponry, which in turn makes that government stronger against its greatest adversary…America.

At some point it would be nice if Americans got a wake-up call that a Google is not some innocuous entity that allows us to simply Google things. How very quaint and exactly what the powers that be at the behemoth want us to believe. But to them I would simply say, 1984, the incredibly prescient George Orwell book depicting of constant surveillance by Big Brother. It would be a very healthy turn of events for democracy to have Google broken up. It has become way too powerful and its actions in China demonstrate it is not to be trusted.