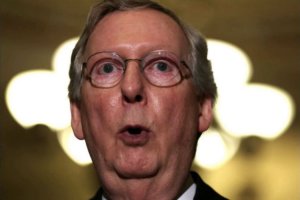 There was a president named Obama. He was liberal and he was black. At the same time, there was a senator named Mitchey who was from a state in the south that refused to honor the national holiday of Martin Luther King, Jr. Keeping this proud tradition of racism alive and thriving, Mitchey, like a communist despot, stopped the rightful and lawful and democratic Supreme Court justice nomination as put forth by said Obama. Mitchey did this not because it was right but because he could. He could make a total sham of democracy and he went for it because it served his shallow purposes. He’s a little man who found he could be a big man in what has turned into a cesspool: the United States Senate. Yeah, right, the great deliberative body.

Well, Mitchey, look what you’ve wrought now. Little Brett may indeed be innocent of sexual assault charges from when he was a teenager. But. It. Doesn’t. Matter. Nope, it doesn’t matter because of you, Uncle Mitchey. You made sure there are no rules or guidelines, much less ethics, when it comes to achieving one’s political goals. You prove that every day of your less than worthless, bankruptcy expert-enabling life. But I’ve got to hand it to you. Your wife has one, plumb job in the bankruptcy expert’s administration. You two are such a fun, happening couple I can’t stand it. Seriously, I can’t stand it.

And so, because of you, Mitchey, there is no good outcome for the bankruptcy expert-fawning Brett Kavanaugh, nor for the country. It is simply open warfare. Democrats who backed Willy are now suddenly aghast that drunk teenagers do stupid things. The evangelists, and I use that term advisedly, have somehow embraced an individual who is testimony to the exact opposite of Jesus. Just makes one wonder if anyone is left with transcendent principles which soar beyond tribalism.