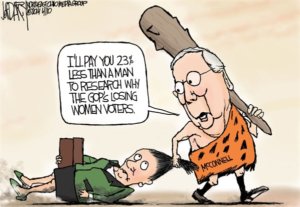 The Democrats are going to have a field day airing television spots of tone-deaf Republican senators (of course, senior citizen white guys) making condescending and patronizing comments as they trivialize sexual assault. Interspersed throughout these comments will be Dr. Ford’s poignant words of what it feels like to be a 15-year-old girl as a 17-year-old young man jumps on top of her and tries to rip off her clothes as he covers her mouth so she can’t scream. No doubt we’ll see in the Democrats’ commercials the ever-amoral Mitchey McConnell say they’ll “plow right through” the Supreme Court vote for Kavanaugh.

But make no mistake about it, Mitchey is not a lone wolf of the Republican Party on this calloused treatment of a woman who has said she was sexually brutalized. Today, for instance, the bankruptcy expert and groper in chief began to show his true colors, as he began casting aspersions on Dr. Ford’s claims. What this tells anyone with a brain larger than a gnat is that many, if not most, Republican senators have absolutely no interest in, nor empathy for, anything that Dr. Ford has said or will say. Shame on them. But what these very small people have likely unwittingly done is free their fellow Republican senators who happen to have some decency and ethical grounding, to vote their conscience. And that vote of conscience would be thumbs down on Kavanaugh. My count is that number could reach five, more than enough to crush the Kavanaugh quest for a seat on the Supreme Court.

The five would be Susan Collins, Bob Corker, Jeff Flake, Lisa Murkowski and Ben Sasse. In fact, if it seems that Kavanaugh’s support has crumbled to this great of a degree, don’t be surprised if some of the other Republican senators don’t jump ship as well. This is not a very brave lot of politicians.