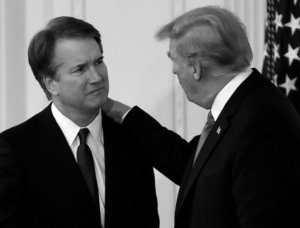 In case anyone was gullible enough to think that Brett Kavanaugh was going to be anything other than a partisan suck-up lackey to the bankruptcy expert and other anti-patriotic Republicans, like Uncle Mitchey McConnell, you should have caught Kavanaugh’s act on Fox last night. Wow, it was pitiful in oh so many ways. I was kinda expecting Bill O’Reilly to come out as a character witness.

First, what in the world is a Supreme Court nominee doing by orchestrating a public relations blitz? The fact that he chose Fox on which to quiver and get all verklempt tells you just how little faith he has in his own tales. No one who remains undecided about Kavanaugh is going to look at a staged Q & A on the bankruptcy expert network and suddenly see veracity in the former hard-drinking high schooler.

Second, why is it that whenever men, usually old white guys, are in trouble with sexual harassment or sexual abuse charges, they haul out the dutiful wife, who sits there waiting to recite her rehearsed lines? By the way, Dems, your Willy and his Tammy Wynette did the same thing only his Tammy went on to ridicule other Tammys. Go figure. But I digress.

So now we head into Thursday’s Senate showdown. Kavanaugh’s drinking in high school, including one of his best friends admitting that he regularly blacked out from his drinking back then, will be under scrutiny, as will the Senate itself. If the old white Republican senators think they can walk away from the Kavanaugh mess by paying a few hours of lip service to a woman who has claimed she was sexually assaulted by their nominee for a lifetime position on the highest court in the land, they are smoking some nasty weed. This. Is. Never. Going. Away. Until Kavanaugh goes away.